The UK Reinstates Tax Free Sales – Then It Doesn’t 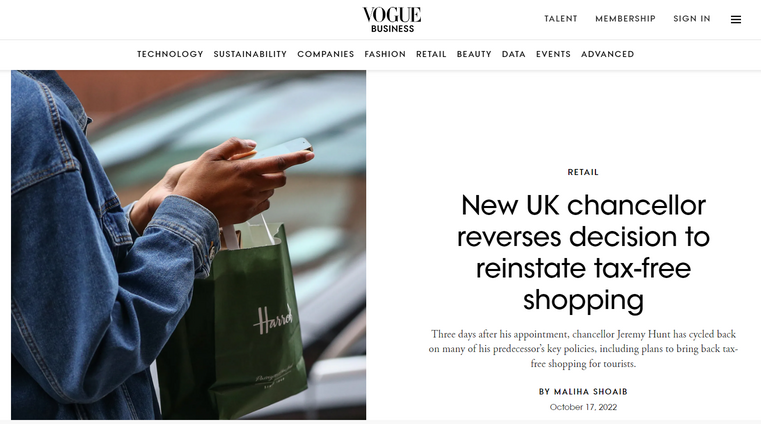 Back in September 2020, the UK government announced that it was ending tax free sales throughout the UK. This included both airport sales and the VAT refund scheme for purchases by foreigners made at high street stores. (See my post UK Government Ends Tax Free Sales for the details.) That made the UK a much less attractive place for travellers to shop compared to alternatives in the EU.

This move caused the industry to scratch its collective head, since no one could really figure out the rationale behind it. Particularly since it was likely to have a significant negative impact on airport retailers and high street stores like Harrods.

So it was with a great deal of satisfaction on the part of the industry when the UK government announced that it was reinstating Tax Free sales. This was also good news for consumers. The decision was included in the ill-fated “mini budget” announced on September 23rd.

But that satisfaction didn’t last long as the new Chancellor reversed that decision three weeks later.

That decision has prompted some pushback from Parliament. Notably, the Digital, Culture, Media and Sport Committee quickly issued a report branding the decision ‘short-sighted’ and ‘incredibly damaging’ to UK tourism. The Committee further called upon the UK Government to carry out an assessment of the direct and indirect impact that withdrawing the VAT Retail Export Scheme will have on inbound tourism. Being the cynic that I am, I wouldn’t hold my breath about that happening any time soon.

So, for the moment, we’ve come full circle.

The key question now for the traveller is how UK airport retailers are pricing those goods which were previously Tax Free. That’ll be the subject of my next post.